PsychedelicNewsWire Editorial Coverage: The North American Marijuana Index of leading cannabis stocks continues to hold onto the 250 range that it meteorically climbed into at the start of the year.

Canada is legalizing cannabis across the board, Mexico is fast-tracking legalization, and industrial hemp appears to be headed for legalization in the United States thanks to landslide approval in the Senate (86 to 11) of its version of the new hemp-friendly Farm Bill. Prospects of a shift in the reluctant attitude of the House as Democrats prepare to take majority there have also had a positive impact. The global cannabis market is on track to hit $146.4 billion by the end of 2025, and the industry hasn’t even seen the first real breakout commercial product in the fastest-growing CBD (cannabidiol) and beverages/edibles markets. Lexaria Bioscience Corp. (CSE: LXX) (OTCQX: LXRP) (LXRP Profile) is a contender for that recognition with bio-absorption-enhancing technology and a growing line of hemp oil CBD products. GW Pharmaceuticals Plc (NASDAQ: GWPH) continues to be the leading name in cannabinoid prescription medicines with its FDA-approved, oral CBD anti-seizure solution, Epidiolex. WeedMD Inc. (OTCQX: WDDMF) (TSX.V: WMD) ranks as one of the top licensed Canadian producers, with a multichanneled distribution strategy and 70,000 square feet of production space already online. HEXO Corp. (OTC: HYYDF) (TSX: HEXO) is another Canadian producer with a track record for low-cost production that currently has around 310,000 square feet of space with plans to tack on a whopping 1 million square feet by the end of the year. Los Angeles-based MedMen Enterprises, Inc. (OTCQX: MMNFF) (CSE: MMEN) is a rapidly expanding U.S. cannabis company with 19 licensed facilities in four key states representing both cultivation and dispensaries. 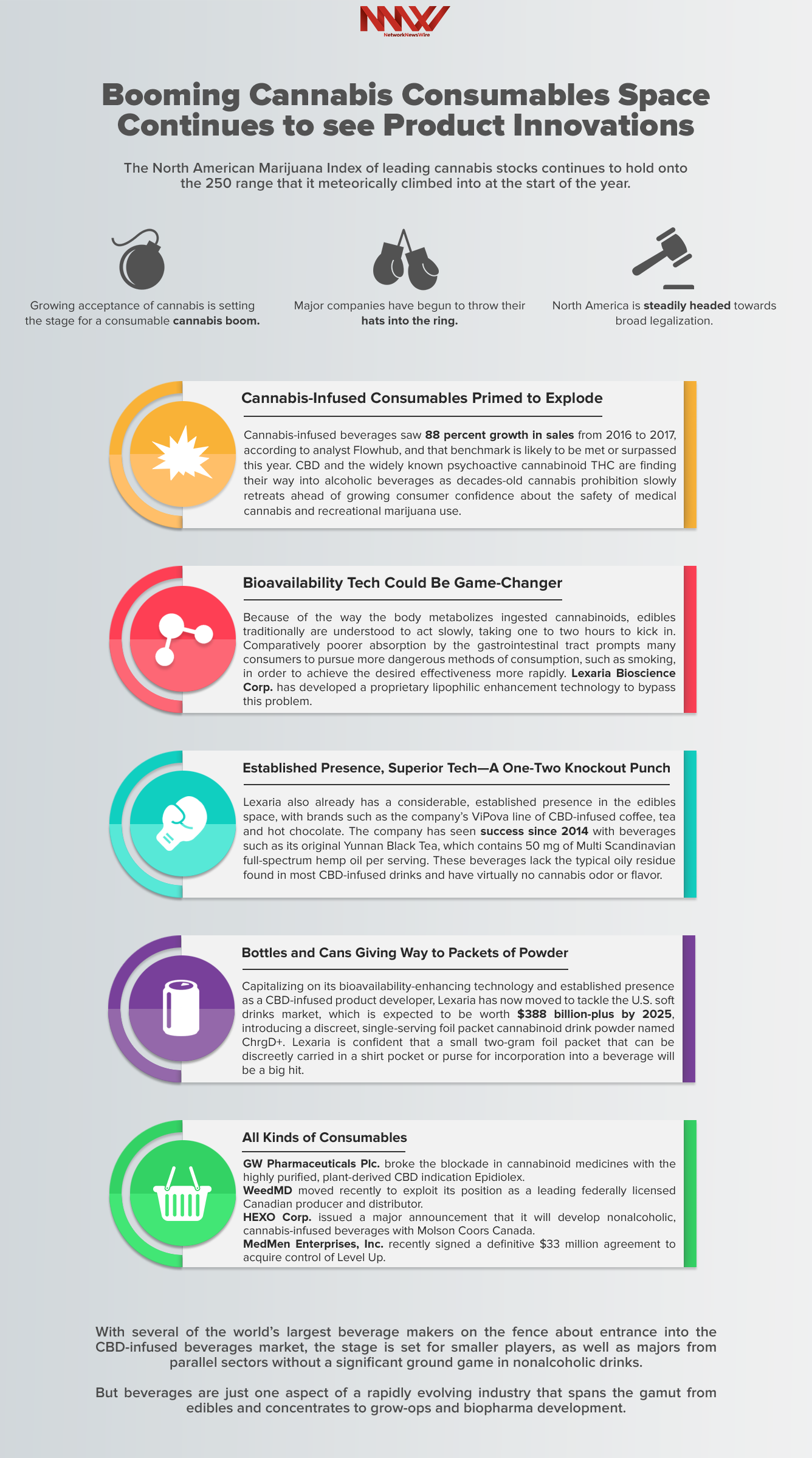 Cannabis-infused beverages saw 88 percent growth in sales from 2016 to 2017, according to analyst Flowhub, and that benchmark is likely to be met or surpassed this year. CBD and the widely known psychoactive cannabinoid THC (tetrahydrocannabinol) are finding their way into alcoholic beverages as decades-old cannabis prohibition slowly retreats ahead of growing consumer confidence about the safety of medical cannabis and recreational marijuana use.

With huge new markets opening up across North America, the potential for cultivators appears to be almost unlimited. Even in places where recreational-use legalization may be a long shot, typically some form of medical access already exists. With baseline metrics such as these, it is little wonder that the North American cannabis market alone was recently projected to hit $41 billion this year, before climbing to $95 billion in 2026.

Bioavailability Tech Could Be Game-Changer

Because of the way the body metabolizes ingested cannabinoids, edibles traditionally are understood to act slowly, taking one to two hours to kick in. Comparatively poorer absorption by the gastrointestinal tract prompts many consumers to pursue more dangerous methods of consumption, such as smoking, in order to achieve the desired effectiveness more rapidly. Lexaria Bioscience Corp. (CSE: LXX) (OTCQX: LXRP) has developed a proprietary lipophilic enhancement technology to bypass this problem, achieving bio-absorption rate increases 10 times greater than other products while slashing the effect onset time from hours to under 20 minutes.

Lexaria’s proprietary technology is patent protected for CBD and other nonpsychoactive cannabinoids and has patents pending for THC, other psychoactive cannabinoids, NSAIDs (non-steroidal anti-inflammatory drugs), nicotine and other molecules. Essentially a B2B, Lexaria is in an enviable position amid the rise of cannabis edibles ranging from recreational drinks to CBD-based nutraceuticals, with a key piece of technology that the company can out-license to third-party partners. Moreover, the company’s proprietary technology may mask undesirable tastes, eliminating the need for sugar-filled edibles, and may actually allow cannabinoids to bypass being broken down by the liver if desired.

Lexaria also already has a considerable, established presence in the edibles space, with brands such as the company’s ViPova line of CBD-infused coffee, tea and hot chocolate. The company has seen success since 2014 with beverages such as its original Yunnan Black Tea, which contains 50 mg of Multi Scandinavian full-spectrum hemp oil per serving. These beverages lack the typical oily residue found in most CBD-infused drinks and have virtually no cannabis odor or flavor.

At the low cost of only 2 cents per milligram ($1.25 per serving), the company’s delicious ViPova teas, which come in a variety of flavors including Earl Grey and Herbal Masala Chai, are a testament to Lexaria’s ability to deliver high-value beverages to the cannabis market. The increased bioavailability of the CBD in these beverages, thanks to the company’s proprietary technology, combined with the low per-unit price, represents an incredible value that consumers are noticing. Also, Lexaria’s product mix currently includes the company’s branded Lexaria Energy Foods as well as TurboCBD supplements.

Bottles and Cans Giving Way to Packets of Powder

Capitalizing on its bioavailability-enhancing technology and established presence as a CBD-infused product developer, Lexaria has now moved to tackle the U.S. soft drinks market, which is expected to be worth $388 billion-plus by 2025, introducing a discreet, single-serving foil packet cannabinoid drink powder named ChrgD+. Lexaria is confident that a small two-gram foil packet that can be discreetly carried in a shirt pocket or purse for incorporation into a beverage will be a big hit. After all, consumers can’t show up at their kid’s soccer game with a can of soda whose branding announces “cannabis” to everyone in view.

The multi-spectrum cannabinoid portable drink powder ChrgD+ can turn any drink into a CBD-infused beverage, including wine or cocktails. While currently only available in a CBD-from-hemp version, Lexaria is in talks with cannabis companies to realize its objective of deploying a THC version of the powder.

Powdered single-serving packets of consumers’ favorite drinks have exploded in popularity during recent years as an increasing number of beverage makers are opting to give consumers the convenience of mixing their own drinks from flavor packets containing the rich, distinct flavor profiles of brands they have come to know and love. The same thing is now happening in CBD drinks, and Lexaria may possess some distinct advantages over the competition.

All Kinds of Consumables

CBD and THC appear to be rapidly making their way into all kinds of consumables. The industry’s reputation continues to be improved in the eyes of consumers due to advancing breakthroughs in cannabinoid medicines used to treat everything from epileptic seizures to inflammatory bowel disease.

GW Pharmaceuticals Plc (NASDAQ: GWPH) broke the blockade in cannabinoid medicines with the highly purified, plant-derived CBD indication Epidiolex, which is available in the United States as of November 2018 for the treatment of seizures associated with severe forms of epilepsy. This one company has arguably done more than any other to improve public perception of the cannabis sector, specifically medical cannabis. The company is not resting on its laurels either, following up the availability of Epidiolex via physician prescription with a patient support program designed to help Epidiolex users obtain access to therapy.

HEXO Corp. (OTC: HYYDF) (TSX: HEXO), which produces cannabis through its Hydropothecary brand, issued a major announcement in August that it will develop nonalcoholic, cannabis-infused beverages with Molson Coors Canada. This joint venture with one of the world’s biggest beer makers is a serious play by HEXO to establish itself in the burgeoning cannabis-infused drinks market. This announcement was followed up by word that HEXO has closed on the acquisition of its first major facility outside of Quebec, taking a big step toward realizing the company’s hub-and-spoke business expansion strategy.

MedMen Enterprises, Inc. (OTCQX: MMNFF) (CSE: MMEN) recently signed a definitive $33 million agreement to acquire control of Level Up (Kannaboost Technology and CSI Solutions), which has a 25,000-square-foot production facility as well as retail locations in Scottsdale and Tempe, Ariz. Furthermore, MedMen will obtain a 40 percent stake in the top-selling K.I.N.D. Concentrates brand via the acquisition. MedMen also recently acquired the retail operations and license for a key location in Santa Ana, California, from Captor Capital Corp. in an all-stock transaction, adding to the company’s growing strategic footprint in one of the most affluent areas of Southern California.

With several of the world’s largest beverage makers on the fence about entrance into the CBD-infused beverages market, the stage is set for smaller players, as well as majors from parallel sectors without a significant ground game in nonalcoholic drinks. But beverages are just one aspect of a rapidly evolving industry that spans the gamut from edibles and concentrates to grow-ops and biopharma development.

DISCLAIMER: PsychedelicNewsWire (PNW) is the source of the Article and content set forth above. References to any issuer other than the profiled issuer are intended solely to identify industry participants and do not constitute an endorsement of any issuer and do not constitute a comparison to the profiled issuer. The commentary, views and opinions expressed in this release by PNW are solely those of PNW. Readers of this Article and content agree that they cannot and will not seek to hold liable PNW for any investment decisions by their readers or subscribers. PNW is a news dissemination and financial marketing solutions provider and is NOT registered broker-dealers/analysts/investment advisers, hold no investment licenses and may NOT sell, offer to sell or offer to buy any security.

The Article and content related to the profiled company represent the personal and subjective views of the Author, and are subject to change at any time without notice. The information provided in the Article and the content has been obtained from sources which the Author believes to be reliable. However, the Author has not independently verified or otherwise investigated all such information. None of the Author, PNW, or any of their respective affiliates, guarantee the accuracy or completeness of any such information. This Article and content are not, and should not be regarded as investment advice or as a recommendation regarding any particular security or course of action; readers are strongly urged to speak with their own investment advisor and review all of the profiled issuer’s filings made with the Securities and Exchange Commission before making any investment decisions and should understand the risks associated with an investment in the profiled issuer’s securities, including, but not limited to, the complete loss of your investment.

PNW HOLDS NO SHARES OF ANY COMPANY NAMED IN THIS RELEASE.