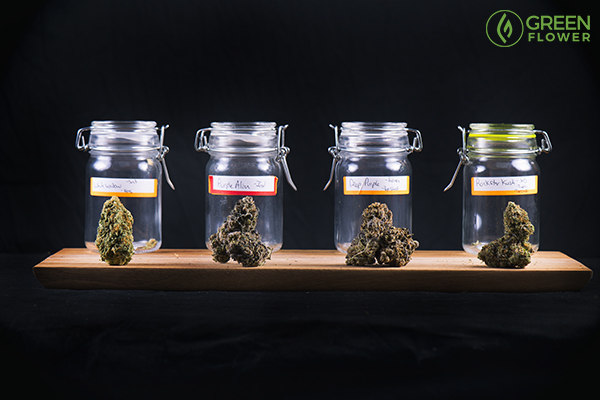 The headlines are jarring.

“A new study from King’s College London finds that smoking Skunk, a high-potency variety of pot, is linked to changes in the white matter connections between the two hemispheres of the brain,” writes Forbes.

For decades after the herb was first banned, the psychoactive cannabis plant was a topic that sparked anxiety amongst the general public.

In a culture long dominated by Puritan values, there has been little room for the tolerance of mind-altering substances.

That is to say, there has been little tolerance for stimulants other than alcohol, nicotine, and productivity-inspiring caffeine.

More strikingly, there has been little acceptance of the notion that a humble plant can inspire significant changes in consciousness, for better or for worse.

After all, if inhaling an herbal vapor can change the way that you think and behave, what does that say about our human connection to Nature?

Plagued for decades by stereotypes of triggering mental illness, the loss of control over oneself, and inspiring promiscuity, there are few herbs that have been used to strike fear in the minds of the public as much as cannabis.

The pendulum of tolerance has changed direction in recent years, however, swinging in favor of majority support for safe access to the enigmatic and largely medicinal plant.

Yet, many mysteries regarding how we should approach this mind-altering herb still prevail.

One such mystery is the question of just how much cannabis can change our minds.

Is high-potency cannabis bad for you? 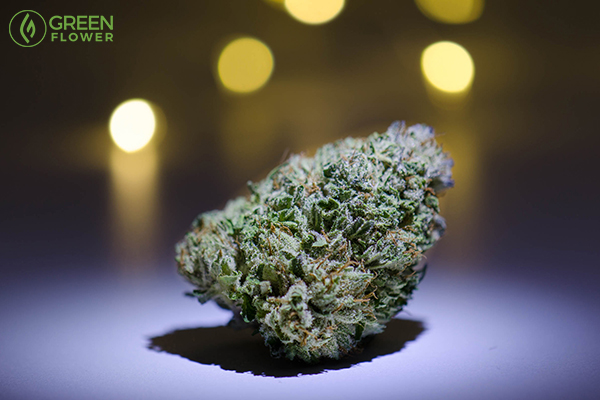 In recent years, cannabis has become more potent than ever.

In fact, a 2015 study presented at the Meeting and Exposition of the American Chemical Society discovered that cannabis samples have increased in potency by three-fold over the last decade.

Samples once tested with around 10 percent of the intoxicating molecule tetrahydrocannabinol (THC), are now clocking in around 30 percent.

An additional study from the University of Mississippi found that the average THC level in seized cannabis samples hovered at mere 1.45 percent before 1972.

With this sharp increase in psychoactive strength, does cannabis have a worsening impact on mental and physical health?

This is the question that public health officials and researchers are scrambling to answer.

Thankfully, with the growing acceptance of the cannabis plant comes better, higher-quality research on the topic.

While firm answers to this essential question are still out of reach, here’s a brief breakdown as to some of the most well-publicized findings on high-potency cannabis:

Those who have come to know and love the cannabis plant are often quick to tell you about the seemingly innumerable benefits of the herb.

And it’s true, a rapidly growing body of evidence has found that THC effects include using it as a potent analgesic, anti-inflammatory, anti-oxidant, and it has been found to kill tumors in animal models of certain types of cancers.

However, it’s also now well-known that with high doses come more THC side effects, many of which are acute.

High doses of THC can cause a rapid heartbeat, which remains a topic of concern in the scientific literature on the cannabis plant.

Studies have shown that THC stimulates the release of the neurotransmitter melatonin, which is a chemical responsible for managing the body’s internal clock.

While this may be helpful for those in need of a natural sleep aid, continuous consumption over the long-term may cause changes to the sleep cycle and cause withdrawal symptoms for those that decide to lay off the herb. 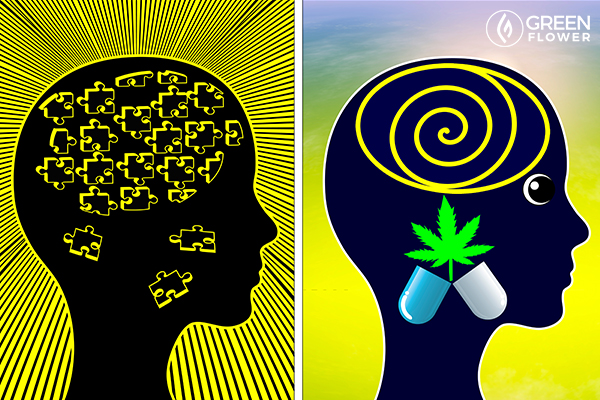 The overall benefit of THC effects may depend on how much you consume.

It is now fairly well-documented in the scientific literature that the psychoactive has biphasic effects. This means that while the compound can be helpful in low to moderate doses, the effects begin to produce the opposite experience once you cross a certain dosage threshold.

For example, a study published by the University of Illinois at Chicago found that low to moderate doses of THC successfully eased stress symptoms in a mock job interview.

Participants that were given higher doses, however, reported more stress and agitation than both controls and low-dose counterparts.

Similar results have been found in early studies on pain, motor activity, and on anxiety.

3. Cannabis may be more potent, but most consumers use less

While there is a lot of concern over the dramatic increase in cannabis potency in recent years, some experts speculate that the spike in THC has been met by real changes in consumer behavior.

The biggest change? Cannabis may be stronger than ever, but most consumers use less of the herb to achieve the same psychoactive effect.

As Dr. Gregory Smith, who received his medical degree from Rush Medical School and earned a Masters in Public Health from Harvard University, writes in his book Medical Cannabis: What Clinicians Need to Know and Why:

“With the increasing potency of the plant material, the amount of cannabis smoked or vaporized by people who use it has declined…People tend to naturally titrate the dose by the psychoactive effects, using a series of closely spaced inhalations (hits) of a pipe, vaporizer, or cannabis cigarette.”

4. Those who fare worst with cannabis are adolescents

Research has yet to prove that cannabis, by itself, is a direct cause of lasting mental illness. However, there are some very real concerns regarding teens and young people who pick up a protracted high-THC habit early on.

“We have a special concern for young people in their late teens and early twenties, whose brains are still developing,” authors write in a press release from the American Osteopathic Association.

If recent research is any indication, the younger the consumer is when they begin regularly consuming cannabis, the greater the likelihood of eventual psychiatric issues.

For example, a research letter published in JAMA Psychiatry drew attention to the fact that frequent cannabis consumption often antedates psychotic symptoms in youth, not the other way around.

To come to this conclusion, researchers examined data gathered from 3966 adolescents over a four year period. The age of onset of cannabis consumption was 13 years old.

Other research, however, has found that delaying the onset of cannabis consumption resulted in a significantly decreased risk of psychiatric distress.

Such was the finding in a 2018 study conducted at the University of Montreal, which found that even delaying cannabis consumption to the ages of 15 to 17 substantially reduces risk from 68 percent to 44 percent.

Of course, there is still much to be discovered about whether or not these teens are attracted to chronic cannabis consumption because of confounding environmental or mental health factors, regardless of time of symptom onset. 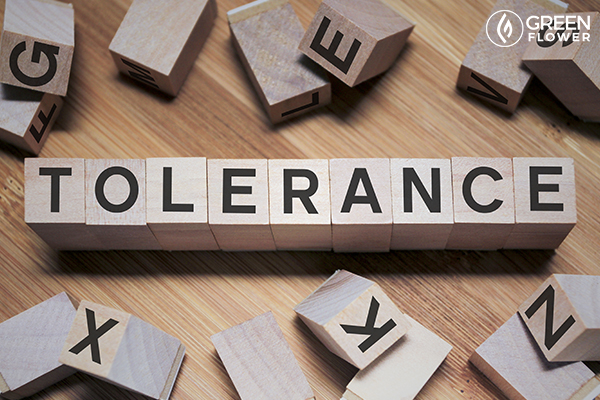 Finally, there is one major factor to consider when thinking about high-dose THC: tolerance.

As many cannabis consumers are quick to discover, while inhalation of some potent high-THC flower can inspire anxiety and a rapid heartbeat in new consumers, most individuals develop a tolerance to the plant chemical over time.

Particularly important for medical cannabis consumers, this tolerance to high doses of THC may be needed for the management of severe ailments like neuropathic and cancer-related pain.

The more THC you consume, the more the body adjusts at the cellular level to accommodate the psychoactive.

When these receptors are downregulated, the consumer loses sensitivity to THC effects. To an extent, anyway.

For recreational consumers, developing a tolerance to THC side effects may not be needed.

For example, maintaining a lower tolerance by frequently taking breaks from cannabis or switching between high-CBD and high-THC cultivars enables consumers to consume less of the herb and still achieve a happy, euphoric sensation.

– This article was originally posted at Green Flower

Do you have a questions or are you interested in working with PNW? Ask our Editor

This article contains Third-Party Content submitted by third parties, including articles submitted through the PNW Premium Partnership Program. All opinions, statements and representations expressed by such third parties are theirs alone and do not express or represent the views and opinions of PNW or its affiliates and owners. Content created by third parties is the sole responsibility of such third parties, and PNW does not endorse, guarantee or make representations concerning the accuracy and completeness of all third-party content. You acknowledge that by PNW providing you with this internet portal that makes accessible to you the ability to view third-party content through the PNW site, PNW does not undertake any obligation to you as a reader of such content or assume any liability relating to such third-party content. PNW expressly disclaims liability relating to such third-party content. PNW and its members, affiliates, successors, assigns, officers, directors, and partners assume no responsibility or liability that may arise from the third-party content, including, but not limited to, responsibility or liability for claims for defamation, libel, slander, infringement, invasion of privacy and publicity rights, fraud, or misrepresentation, or an private right of action under the federal securities laws of the United States or common law. Notwithstanding the foregoing, PNW reserves the right to remove third-party content at any time in its sole discretion.